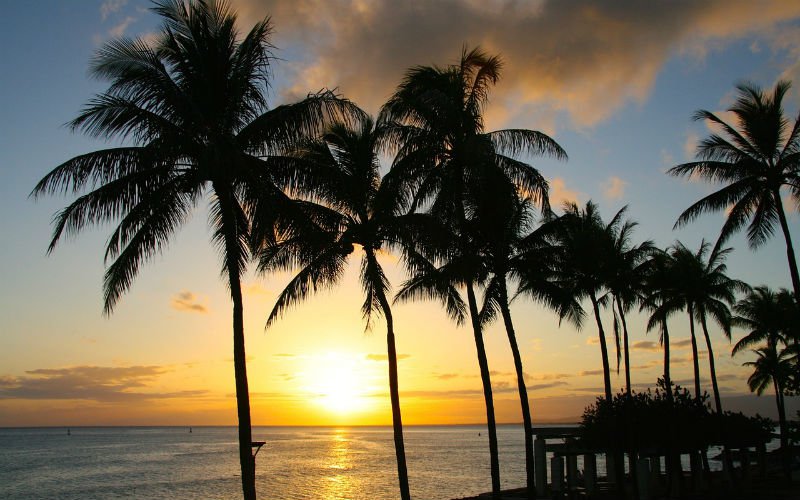 The Hawaiian Islands are part of a long archipelago in the Pacific Ocean. There are eight major islands, but most travelers visit Oahu (the main island), Maui, Kauai or the Big Island of Hawaii. Oahu, with its bustling Waikiki scene, is the most common senior trip destination, but all the islands have their respective virtues.

As mentioned, most senior class trips to Hawaii are based out of Waikiki, a section of Honolulu along the coast just west of the iconic Diamond Head crater. The beach is a long strip of sand packed with sunbathers, and it smells faintly of coconut oil. The water is warm, and the rolling waves are usually perfect for learning to surf. There is a plethora of fashionable shops lining Kalakaua Blvd and also an abundance of nightlife for all ages. Outside of Waikiki, students can visit the historic Arizona Memorial in Pearl Harbor, Hanauma Bay (a snorkeler's heaven), Diamond Head, the Polynesian Cultural Center, surfing's infamous North Shore, assorted authentic luaus, as well as many different hikes and beaches.

Maui is the second most populated Hawaiian Island, but much less so than Oahu. Tourism is the dominant industry on Maui, and many of the scenic beaches are fronted by luxury hotels. These properties are meticulously maintained and surrounded by shopping venues and restaurants. Mount Haleakala towers over the eastern part of the island, and a tropical rainforest covers much of its vast slopes. If feeling adventurous, graduates may want to take a guided bike tour down from Haleakala's peak. The smaller, western lobe of Maui Island features Lahaina, a former whaling village, and Kaanapali, a coastal region with some of the nicest beachside hotels.

Kauai, also known as the "Garden Isle," is perhaps the most laid-back of the main Hawaiian Islands. The main city of Lihue is where you arrive, but there are picturesque areas to the south and north. On the south side, Poipu is Kauai's equivalent of Waikiki, but on a much smaller scale. Located on the drier side of the island, Poipu has sunny weather, good snorkeling and some of the grander beachside hotels. It also has a selection of shops and restaurants. Further west is Waimea Canyon, the impressive "Grand Canyon of the Pacific." The north side of the island, called the Napali Coast, is sparsely populated but contains luxurious resorts in Princeville near Hanalei Bay.

Senior Trip to the Big Island

The Big Island, also known simply as "Hawaii," is considerably larger than the other Hawaiian Islands. Because of this, different stops on the Big Island can be a few hours drive apart. Most visitors fly into Kona, which is on the western side of the island. Because the tradewinds deposit most rain on the eastern side, Kona is sunny and arid, especially northwards up through the Kohala Coast. Much of the landscape is covered by lava rock from previous flows. Nestled among the rocks, bays and hills, Kona has several posh resorts, ocean activities, shops and restaurants. Hilo, the other main city, is on the opposite side of the Big Island. Hilo is located in a much wetter region, and it has lush foliage and waterfalls to show for it. This island also boasts active volcanoes, and Hawaii Volcanoes National Park is a top tourist attraction. On the whole, the Big Island has varied terrain and is more spread out than the other islands, and that aspect makes it some people's favorite.

Get a free quote for your senior trip to Hawaii!